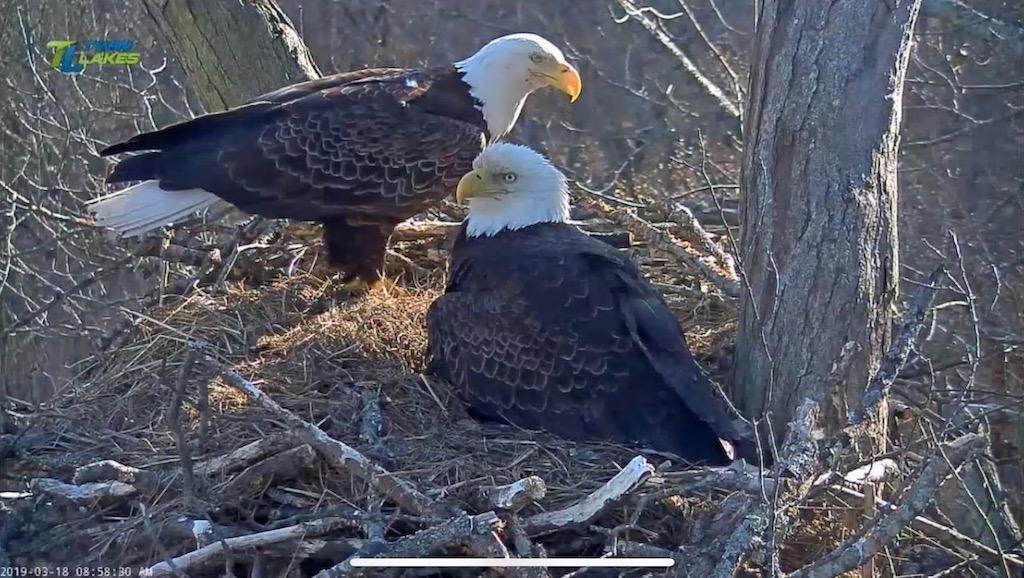 Dale Hollow Lake has become a nesting spot for American Bald Eagles as they return each year to build or refurbish their nests, lay eggs and watch over their eaglets.

One such quiet spot was noticed in 2016, and soon a group of volunteers took action to share the adventures of these majestic birds on a live-streamed video. Obey, the male, and River, the female, have returned to the current nest each year since the video camera’s installation.

The intimate view of nature is not always a happy one, because life is not always easy or kind. Viewers watched in distress as the nest fell during a 2020 strong storm. Somehow the nearly grown eaglets survived.

The Eagle Cam enables humans to watch the life cycle of the pair of eagles who have made this spot a nesting home. They typically have incubated two eggs each year, but in three separate years they delighted viewers with three eggs. The eaglets are raised in the nest for 76-88 days before leaving (fledging).

“I think people are fascinated with nature, although sometimes it is not the outcome they want,” observed Darlene Neeley, a long-time volunteer who manages the @DaleHollowEagleCam Facebook page, which has grown to 48,926 followers.

Neeley said that food was scarce this year for the eaglets as Obey and River were repeatedly disturbed by intruders who kept them busy defending the nest instead of feeding the eaglets. Such is the natural order of life in the eagle population, making it a clear reminder of how precarious their population still remains.

When the camera project was initiated, the Corps of Engineers issued a permit in record time. The U.S. Fish and Wildlife Service provided guidance as to how to properly establish a wildlife camera without disturbing the nesting activities of the Eagles. Twin Lakes TV donated their time, cameras and network to broadcast the Eagle Cam over the cable network on Channel 995.

The non-profit Dale Hollow Lake Marina Association, the Friends of Dale Hollow Lake and a team of dedicated volunteers continue to support the project so that the livestream of River, Obey and their babies can be seen all over the world. Donations are welcomed to offset the cost of the cameras and the streaming services.

The Dale Hollow Eagle Cam has become an extremely important educational tool for all the Upper Cumberland’s school children as almost every school has multiple classrooms that broadcast the Eagle Camera throughout the day so students can witness the tremendous parenting skills of Obey and River.

This majestic bird was placed on the endangered species list by the United States Department of Interior and the U.S. Fish and Wildlife Service in 1978. Hunted, exposed to pesticides and navigating in their often-disturbed habitats, the Bald Eagle was nearly extinct. With hard work from volunteers, hunters and migratory bird experts, a remarkable comeback has occurred. Removed from the endangered status as of 2007, the Bald Eagle population has continued to soar. Today, there are an estimated 316,700 Bald Eagles in the United States, and the national symbol remains a protected species.

The ecosystem in which American Bald Eagles exist is a fragile one. Watching the developments of the nest via the live feed keeps the eagles protected.

Neeley noted that Eagle Cam viewers are very dedicated. However, sometimes an eagle parent obscures the view of the eaglets, oblivious to the fact that everyone is eager to see their babies. Sometimes, for reasons not understood, the parents suddenly move the nest, leaving it to the volunteers to find them again and requiring a move for the cameras without disturbing the eagles’ daily life.

Eagle enthusiasts are all invited every third weekend in May to a potluck covered dish picnic at the lake, where they later take a boat ride to view the nest. Look for details of this annual event on the Eagle Cam Facebook page.

For more information about the Eagle Cam and to learn how to help, visit DaleHollowEagleCam.com.

Photo Cutline: River and Obey on their nest at Dale Hollow Lake.